Camp Vught National Memorial recently came into possession of three special photos, which were taken by a German soldier during one of the Jew transports from the station in Vught in May 1943. Director Jeroen van den Eijnde was surprised by the find: “In more than a few minutes' time. For thirty years I have rarely come across such special images and they are unsurpassed. Thanks to these photos, you are almost 80 years later, as it were, among the victims on the platform. With this, our image of the events in Vught at the time became much sharper in one fell swoop. Until now only a few photos of Camp Vught National Memorial were known, mostly without prisoners. "

René Kok, image researcher at NIOD: “This is iconic material. I am deeply impressed. These photos are important because hardly any images were known of the Jews transports from the concentration camp in Vught. ” The photos were taken by an ordinary German soldier, not for propaganda purposes. Researcher Gerard Groeneveld, author of Nach Holland, the May days of 1940 through German eyes: “The importance of the photos lies in the rarity of the images. How much is actually visible of the persecution of the Jews in the Netherlands and more specifically of Camp Vught? Especially on the last subject there is almost nothing. ” 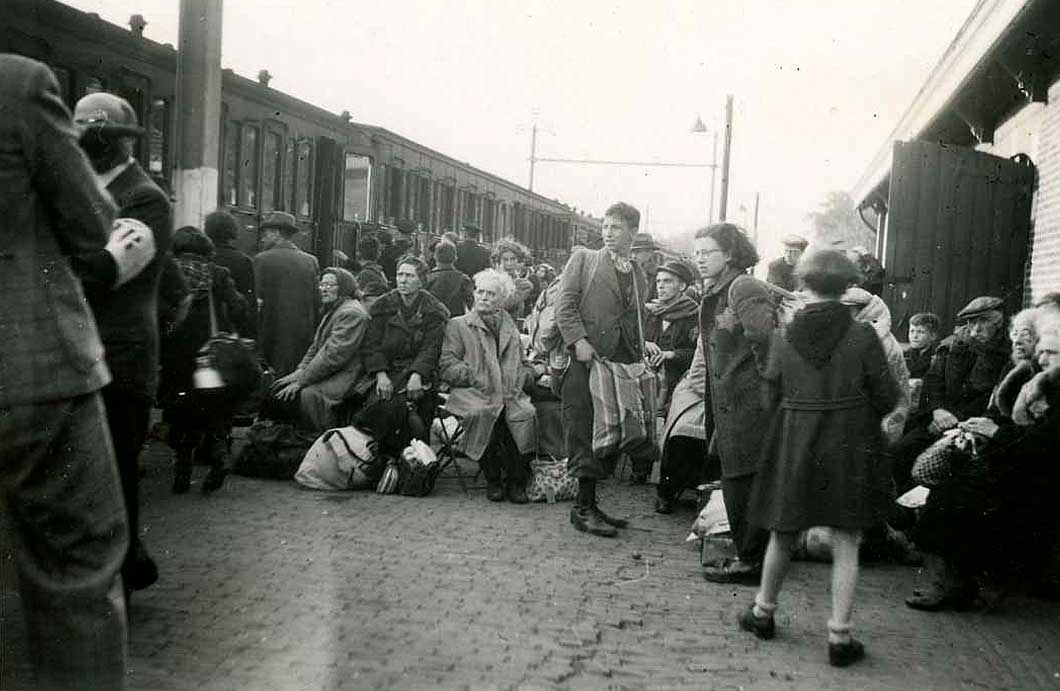 Although the photos have only just been placed in the museum depot, NIOD was soon able to find out the date of the transport. Letters and numbers can be read on various pieces of luggage. Two of those combinations could be traced back to Rebecca de Groot, born June 12, 1892, living in Amsterdam and Rosalchen de Bruin-Salomonson, born September 1, 1889 and from Hardenberg. On the basis of this knowledge, it could then be established via the transport lists that the photos were taken on May 23, 1943, when about 1.250 people were deported to Westerbork. From there, most of them went almost immediately to the Sobibor extermination camp, where they were murdered upon arrival in the gas chambers. 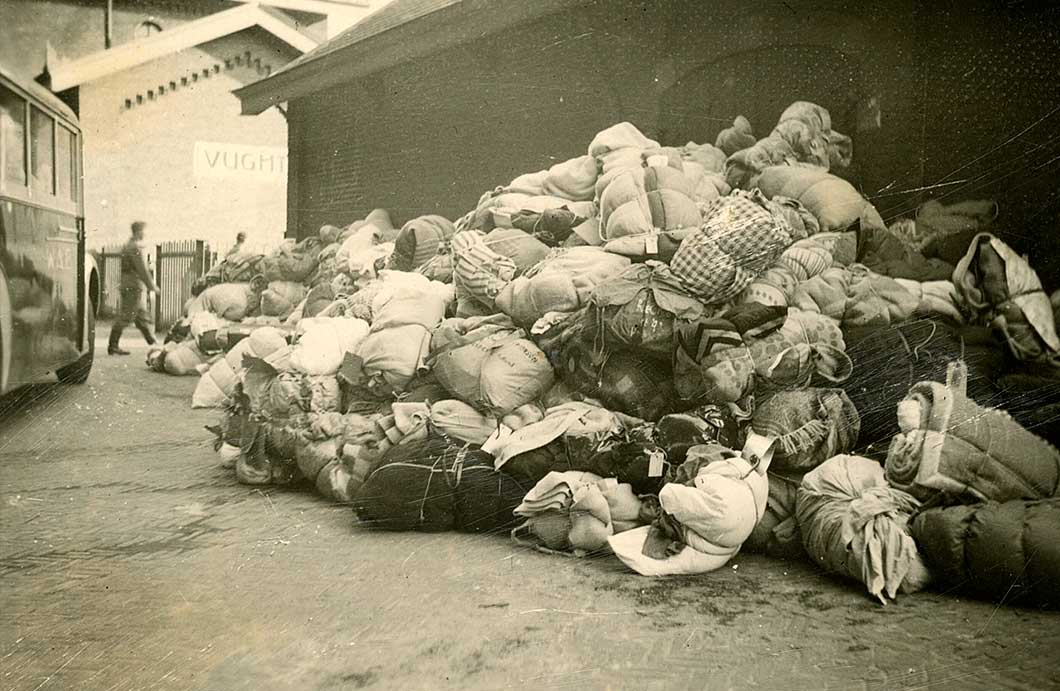 Three small pieces of yellowed paper measuring 7 by 4 centimeters. On the back in diagonal "Agfa" and striking: the remains of dark gray photo paper that came after the photos were removed from the photo album. Not much more is known about the fact that the owner of that album as Zur Erinnerung an meine Dienstzeit collected all kinds of snapshots from the war years. “It is striking that nobody seems to be aware of the photographer, except for one Jewish man looking into the camera,” says Kok. "The photographer will have been wearing his uniform and therefore not noticed." The photos also show how two Dutch policemen escort people to the train. An employee of the Jewish Council is also present on the platform. The seriously ill are lying on stretchers. Bystanders watch behind a wooden fence.

Jew transport to and from Vught

Konzentrationslager Herzogenbusch (popularly called "Camp Vught") existed between January 1943 and September 1944. In total, more than 32,000 people were locked up here for short or longer periods. It was a concentration camp for all kinds of categories, including political prisoners and hostages, but also a transit camp for more than 12,000 Jews. Most of the Jews' transports from Vught went to the Westerbork transit camp; twice a transport went directly to Auschwitz. From Westerbork almost all victims were transported to the Nazi extermination camps Auschwitz and Sobibór in occupied Poland, where almost all were murdered. 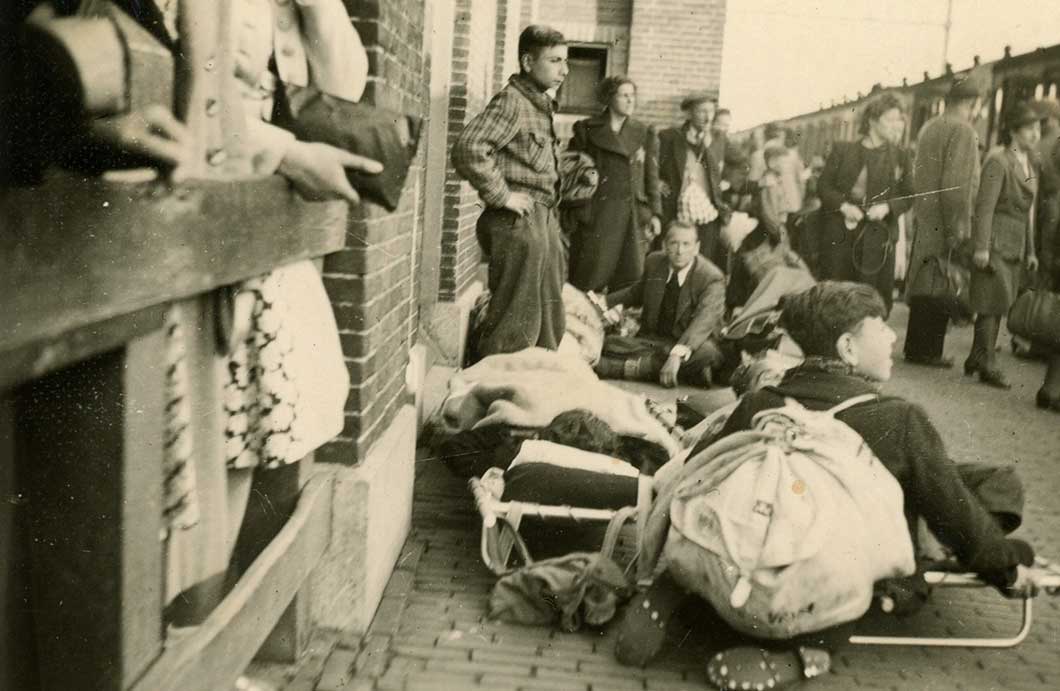 Little footage is known of Camp Vught. That makes this find extra special. Van den Eijnde: “We know from eyewitness accounts that photographs were taken and even filmed, as was the case, for example, with the visit of SS-Reichsführer Himmler to the camp in February 1944. But where has all that material gone?” A special investigation in archives worldwide a few years ago, brought disappointingly little news to the museum. Van den Eijnde was hopeful: “There still had to be a lot of photo material in old dusty photo albums tucked away in many attics in Germany and perhaps also in the Netherlands. After all, Dutch SS men were also involved in the security. ”
Groeneveld endorses this: “Thanks to the private photos of German soldiers that are increasingly offered on auction sites, it is possible to make such special finds. Previously, this happened, for example, with images from the May days of 1940, of which hardly any images were known until then. ”

Photography was already extremely popular in Germany before the war. One in ten German soldiers carried a camera and from the outset Hitler's soldiers were encouraged to take photos during their victorious campaigns. The same was true when they were stationed in occupied territories. Groeneveld about the photos that have now surfaced: “Many such poignant photos are hardly ever offered. In contrast to the shocking photos taken by German soldiers in Poland or Russia of the murder of the Jews. That doesn't mean they weren't made. These three images are proof of this. " These three photos were offered on an auction site.

The photos still raise many questions. Who are in the photos? Can we still find out the identity of the photographer? The memorial center will conduct further research. What is certain is that the photos are an extremely valuable addition to the story that the museum wants to tell. Van den Eijnde: “Of course this visual material will be added to our recently completely renewed exhibition. We are also thinking about how to share this find and new information with our audience, when the museum will hopefully be open again for visitors soon. Also for educational purposes, this image, which also shows children and young people, is an extremely important new source. ”

This blogpost has been read 2005 times
Visit the website or page
Add your event!

Impressive and unique photographs found of Kamp Vught in The Netherlands.
Also read these interesting articles

The personal stories on this website are under copyright of the veterans themselves and the families or people who gave the stories to me. Pictures used on this webiste are owned by the veterans who made them or by whomever made the pictures/videos (mostly these images are in the public domain and can be freely used). Also bits of texts have been used with no harmful intent in any way.

If you are the owner of any picture(s) or fragments of texts that you wish to remove from this website please contact me. But I ask you to look at the nature of the website and it's goal, educating the viewer about WW2.

Important websites
© 2000 - | D-Day, Normandy and Beyond. All rights reserved.